Messari.io’s Weekly Recap for May 20, 2022 reported that all seven of the sectors it reports on finished the week in positive territory overall, with Smart Contract Platforms return 4.9% for the week:

The cryptocurrencies market had a much-needed breather after a brutal decline last week. All sectors covered were in the green this week with three of them ending with double-digit returns. The gaming sector led the pack with a return of 18.30%. A significant relief following its 40% freefall previous week. Up next was DeFi with a weekly return of 11.21%, another sector recovering from a harsh decline from the previous week (-34.71%). The currencies sector remained the most stable within the group, ending the week 3.14% above the previous. The $ZIL coin however returned -2.55% over the same time-frame this week after cycling within a sideways channel and recovering from a low of close to -15%: 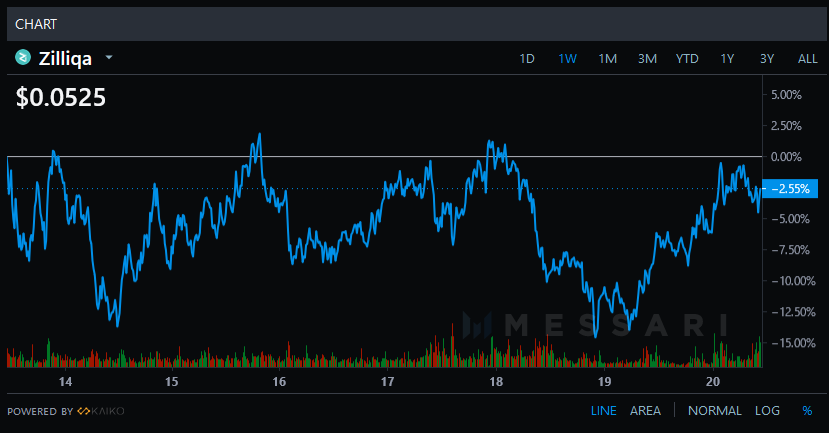 When comparing Zilliqa’s price performance with that of its top peers this week, it lagged most of them with the exception of NEAR and Avalanche:

This week saw the addition of Flow (FLOW) to the list of top 10 smart contract platforms after switching places with Ethereum Classic (ETC) and benefitting from the open spot that Terra (LUNA) left following its swift departure. The top performer of the week was Cosmos (ATOM) with a 16.9% gain, followed by Solana (SOL) and Polkadot (DOT) with 12.3% and 10.4%, respectively. NEAR lagged the group, ending the week with an 8.2% decline. The broader crypto market has seen a selloff that has been ongoing since early April, and the ZIL coin over the last day or...

Get ZIL Staking Benefits If You’re Waiting on Ethereum…

ZilCryptoConcierge
May 3, 2022 2 min read
Have A Story? Get Featured On Zilliqawire Plus 100+ More Exclusive Crypto News Sites Tell Me More !